[introduction to the collection]: from May of the third year of Xianfeng, ten big coins were first made, then fifty big coins were made in August, and then 100, 500 and 1000 big coins were added in October. There are many versions of Xianfeng coins in Baoquan Bureau, and the changes of book style are complicated. The coins are made of red copper, brass, iron, lead, etc. Baoyuan bureau began to cast ten coins in August of the third year of Xianfeng. In October, it started to cast 50 coins. In November, it cast 100 coins and 1000 coins. The big coins are made of red copper, brass, iron and lead. There are many changes in editions and styles, and there are great differences in size and weight. Baoquanju Xianfeng hundred when the above big money, not rich remains. Among them, there are two or three kinds of layout, size and shape of Xianfeng Yuanbao Dang 500 coins, most of which are sample money, mother money and carving mother.

This product has four characters of "Xianfeng Yuanbao" on its face, read it directly, and recite several characters of "Dang 500" in Manchu and Chinese. Except Manchu, all Chinese characters are in regular script style. By appreciating his calligraphy style, you can feel that his regular script writing is quite effective. He has a good beginning and ending, a sharp turning point, a straight stroke, a coordinated text size and layout rules. The overall (face back Chinese) calligraphy is natural and unrestrained, highlighting the dignified and handsome, and reciting Manchu writing is also a powerful rule. Among them, it can be seen that the characters of "Xian" and "Ga" have more personality, the characters of "Xian" are long, and the characters of "Ga" are "Dazu Bei", which are very similar to the carving mother of Pizai, and the personality style of "Da Qian" is prominent. Therefore, as far as the calligraphy is concerned, the door must be opened. 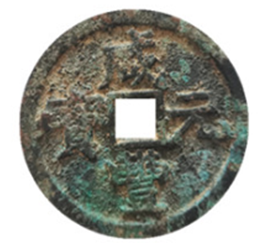 The casting of this product is very regular, the casting body is thick and heavy, the shape is bigger, the casting phase is continuous, the square and round outline is straight, the ground is flat, and the wheel is clean. Good bye, its word outline is deep and straight, and the bulge is natural. It is also found that the strokes of Qian Wen are slightly conglutinated, most of them are clear, and the cast pit scab and copper thorn highlight the natural casting phase of sand casting and show the authenticity. It has no need for detailed surface, and its casting appearance is regular and natural, without affectation. It has the proper style of official furnace casting, and has no doubt about the casting appearance when opening the door. 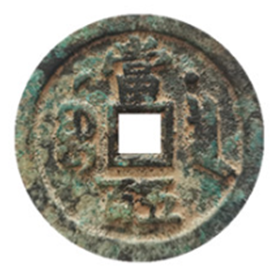 Look at the rust again. It is not difficult to see that this product is handed down with rusty appearance. It can be seen that its coating is very sophisticated, and the local black lacquer is of ancient quality. It is moist and thoroughly ripe. The overall coating is of different depths, and its distribution is natural. The material is bronze, and the color of bronze shows maturity. In a word, this product has been handed down to the world. It's natural and natural. It's so obvious that it's unreachable. Therefore, the appearance of rust slurry can be said to open the door at a glance. To sum up, in short, this product "Xianfeng Yuanbao when five hundred" heavy money, three-phase one material, pure, straight to the point, no doubt. It's hard to find the records in the actual collection. It's not too hard to say that it's rare. Therefore, although it is not xianfengzhen style, it is obvious that it has high collection value because of its emphasis on appearance.