[introduction to collection]: Chumao bottle is a popular bottle style in Qing Dynasty. It has a long thick neck and a flat abdomen, and is named for its shape like water chestnut. It was first created in the reign of Kangxi in the Qing Dynasty. The modeling of water chestnut bottle was founded in Kangxi Dynasty, but it was all made by folk kilns at that time, and few excellent works were handed down to the world. Since Yongzheng period, the modeling of water chestnut bottle came into the eye of Royal kiln, and began to be limited firing, and it was popular until the end of Qing Dynasty, especially the work of tea powder. 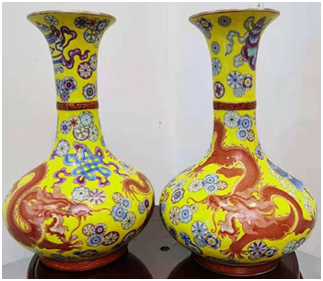 Compared with Qianlong's and later works, Yongzheng's water chestnut bottle has a longer neck, a flat abdomen, a more slender and symmetrical overall shape, and a smaller size, just like a graceful girl. Compared with the ordinary works after Qianlong, its charm is far better. Yellow ground pastel ware is one of the most complicated kinds of ceramics. It was first fired into plain white porcelain. Then it is painted on white porcelain with glass white as the base and fired at 800 ℃, so the color is softer and smoother than hard color. 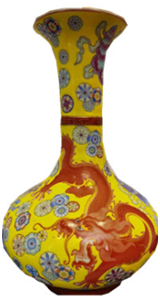 Among them, Huangdi famille rose is the most classic variety, and its peak was in Yongzheng and Qianlong dynasties. The shape of the bottle is a water chestnut bottle. It is open, neck closed, shoulder sliding, belly bulging, foot closed, and yellow glaze is applied on the whole body. The color is as light as lemon, pure and bright. From top to bottom, it is decorated with a ball pattern with a classic pattern painted by pastel technology. The eight treasures of Buddhism are used as ornaments. From neck to bottom, it is decorated with alum red color books, with five clawed golden dragon, dragon pattern, teeth and claws, Looking back, you can see that you have different looks, fierce and fierce, full of Royal prestige, white glaze on the bottom, blue and white materials on the money, and Yongzheng imperial double line four character regular script Fangzhang money. This product is well preserved, very rare, and is a good collection. 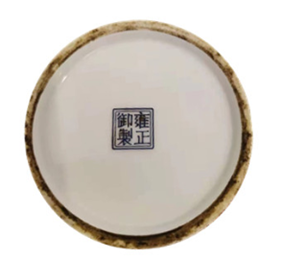